- October 07, 2011
not available for my blog.  Blogger Buzz   introduced  ' Dynamic Viewsin an effort to make it easier for readers to enjoy and discover your posts ' I discovered that while trying to install it I lost my previous template. Spent two hours figuring out how to go back to the old views and ended up with a jumble of gadgets at the bottom of the page.  I should have backed up the previous template, wich I kind of liked.
Post a Comment
Read more 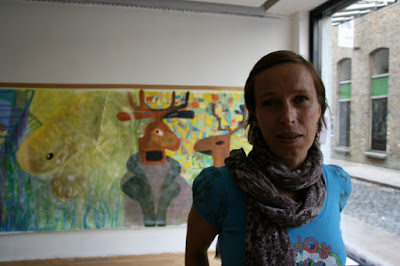 and some pictures! thanks, Catherine!
It's too early to say, but I hope there is going to be some more projects ahead...
Post a Comment
Read more

- October 05, 2011
Eleven Forms comprised  a selection of new drawings, an ongoing series of works-in-progress made over the course of the exhibition, and a participative one night art project on Friday 23rd September (Culture Night) from 5 pm to 11pm.
This is one of the four projects  I organized with the public participation as the most important part. The previous  projects Bridges 2007, Turn-Berlin 2010 and Save Image As 2010 asked  participants to contribute, change, alter, eliminate and  edit.
Exploring the concept “Participation is not everyone”, I made one drawing each day at the gallery using the city's surroundings as a backdrop.  On 23rd September arts centre's visitors  made a large scale drawing 5 x1,5 metres.
I suggested some  themes, such as Walls, Windows, Sky Rain Cloud, Winter, People, Crowd, Street, Invisible, Bicycle, Cars, Light Shelter, Shops, Birds, all of them  based on the main theme The City and Life in the City. The most popular was a theme suggested by  one of the pa…
Post a Comment
Read more
More posts